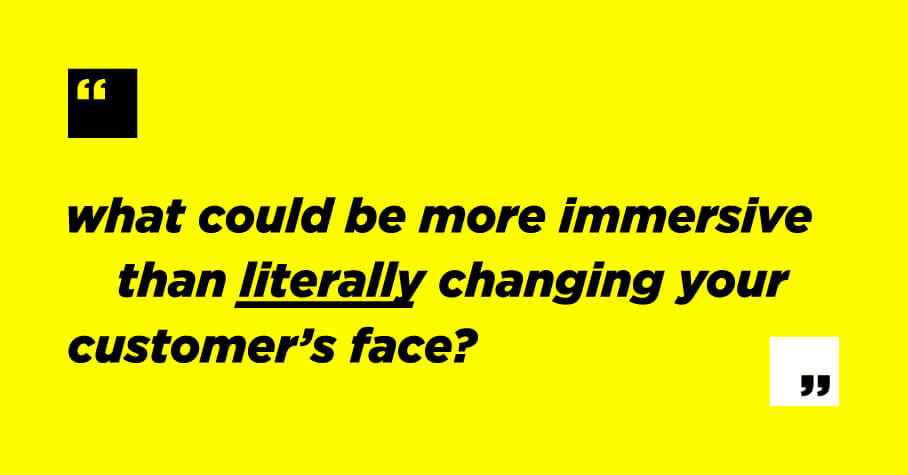 Why You Should Give a $#!t about Snapchat Advertising

by Kaitlin Xouris January 27, 2017
Marketing to Millennials, SnapChat, SnapChat Ads, SnapChat Advertising, Social Media Marketing
Maybe you’re a Snapchat pro, snappin’ pics of everything from your meals (every. single. one.) to your cat sleeping. Or, maybe all you know about Snapchat is that people use it to make their faces look like dogs with freakishly long tongues, or like they are throwing up rainbows. Whatever your level of Snapchat expertise, you can be sure that this is one little dancing ghost that isn’t going to disappear anytime soon, especially for advertisers. Sure, you know that having a Snapchat presence is important—relevancy is paramount. But why should you, as a marketer, give a (insert your favorite four-letter expletive) about Snapchat advertising?

1. It’s about as immersive as you can get

Advertisers are always trying to get themselves in front of the ever-elusive, yet incomparably- valuable millennial audience. Look no further. According to Nielsen Media, Snapchat reaches 41% of all 18 to 34-year olds in the United States on any given day. One of the app’s most distinct and beloved features are Snapchat Lenses. If you have ever been on Snapchat and had your face turned into something else, you’ve used the lenses feature. Snapchat’s powerful facial recognition technology allows users to simply tap on their faces in selfie mode, and transform into everything from an angelic deer to a 90-year-old man, complete with wrinkles and a monocle. Brands are realizing the real opportunity behind Lenses, because in the pursuit of engaging advertising, what could be more immersive than literally changing your customer’s face? In June of 2016, cosmetic company Benefit ran a sponsored lens around the launch of its “ka-BROW!” line—makeup products designed to give women the boss-lady brows of their dreams. Benefit’s sponsored lens leveraged Snapchat’s facial recognition tech to show users own faces with shapely, enhanced eyebrows, accompanied by a small creative banner announcing the brow line. Snapchat not only gets your brand in front of users, but it also gets them interacting with it.

2. It allows you to be in the moment

As marketers, we know that the recipe for campaign success requires four crucial ingredients; the right audience, the right place, the right message and the right time. Snapchat allows advertisers to place Lenses, and their cousin ad-type, Filters. Also available to advertisers looking to catch the eyes of customers during opportune moments are Snap Ads. This ad type runs in between stories, and allows them to naturally view your ad without interrupting their browsing. And, if they are curious about your message, they can simply swipe up for extended content. Recently, brands like Netflix have leveraged this placement to advertise the release of new series. Whether encouraging users to get out and vote with the 2016 “Election Day” filter, spreading the word during World AIDS day or promoting the release of Resident Evil: The Final Chapter, Snapchat promoted Filters, Lenses and Snap Ads can be strategically placed to run during the moments where they will be most relevant. On Super Bowl Sunday last year, Gatorade released a sponsored lens that allowed users to dunk a virtual Gatorade cooler over their video selfies. With more than 165 million views, the Lens was a splashing success. Aside from being highly relevant, the ad allowed users to interact with an event that they otherwise would only be spectators of. By allowing users to be a part of the moment, in the moment, Gatorade managed to score the most successful Snapchat campaign of all time—a title they held for months after the fact. Snapchat promoted Lenses and Filters allow your brand to get in front of customers during the moments that matter most to them.

3. It gets your customers talking One of the most exciting aspects of Snapchat advertising, especially with features like Filters, Lenses, is that the entire purpose of using them is to then share those pictures with friends. The trickle-down effect of Snapchat is hard to compete with—aside from popular video ads like those featured during the Super Bowl, there are few other times where consumers share your ad for sheer entertainment—and so, if one user sends a snap to all their friends using a memorable Lens or Filter, it’s going to start a conversation. On May 5th of last year, Taco Bell launched a sponsored Lens that turned customer’s heads into giant tacos, in honor of Cinco de Mayo. The transformative Lens ad shattered records for the app, resulting in 224 million views in one day, with the average user playing back the ad for 24 seconds before sending it as a snap—to gauge, that’s 12.5 years worth of play in a single day, according to Snapchat data. The conversation didn’t start and end within the Snapchat app, either. Users were sharing their thoughts about Taco Bell’s Lens ad on Twitter and Facebook as well. Even better—Snapchat allows users to save their snaps, so they can continuously share them through whatever platform they chose. How’s that for keeping the conversation going? Why advertise on Snapchat? Not to mention, its sharing capabilities and facial recognition technology make it truly a one-of-a-kind platform.

5 Halloween Ads That Both Fright and Delight Us

Are “stories” really the future of social media?